Is there value to life when it all leads to death? What actually provides value in this life?

These are questions I don’t know the answer to. Hence, I am calling them a koan, a starting point for meditative inquiry.

I have come across several takes on the story of Buddha’s enlightenment. In case you aren’t familiar, it goes something like this. He was born a prince, and he threw himself into all the worldly pleasures at his disposal, but he found no satisfaction in them. So he sought out ascetics who lived in the woods and renounced the physical world, including the body. He fasted to the point he almost died, and realized that this too did not satisfy him. None of what he’d experienced at either end of the spectrum provided any value. So he went and sat under a bodhi tree and meditated until one day he came upon the Middle Way, which super simplified is the idea of always being present to one’s life.

A major part of his contemplation was an examination of the self. What is the self? What are its borders? Is it the body? If you took apart the body and laid out all the pieces, would it still be a body? Etc.

The answer he came up with is often referred to in English as interdependent arising. Basically, the idea that everything is defined by its relationship to everything else, therefore nothing exists separate from anything else and everything is everything else. The first thought just about everyone has to this idea is that it’s crap. Of course there are discrete objects in the world. I can touch an apple. I can see my legs. Etc. It in itself is a koan. It is a challenge to go beyond your five senses and think philosophically.

My husband is intrigued by the ideas of René Girard, a contemporary literary theorist and anthropologist, and Ernest Becker, another 20th century cultural anthropologist. He recently sent me an essay from a blog called Mimetic Margins that addresses ideas of these two thinkers. A quick rundown: Becker wrote a book called The Denial of Death, which argues that all human action is done in relation to our fear of death. Girard wrote about many books, but his main concept was mimetic desire, the idea that humans are mimicking creatures who define our selves and create our identities in imitation of and relation to the society in which we live. Sounds a little like interdependent arising, doesn’t it?

So where do we find value in life, being mindful of our proclivity to create immortality projects?

To look at a different religious narrative, contemplate the Christian idea of God, a being who exists outside of death. A piece of him dwells within everything (depending on your interpretation). This gives us a way to define ourselves outside of ourselves and each other. There is something that exists outside of death, and we are part of that. Just as in Buddhist language, we are part of everything that exists. Just because our physical human form dies, we still exist in all that exists because the tiniest of parts that make us up never disappear. In physics, this would be the idea that energy does not stop existing. It merely changes form. 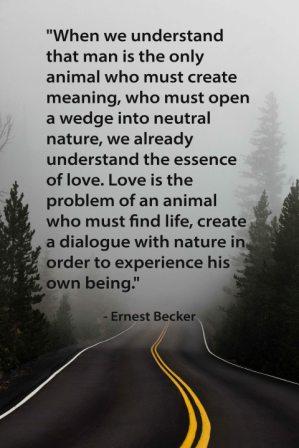 In all these narratives (and I’m sure in some from religions or philosophies I am not as familiar with), it is nothing that we as an individual do to attain immortality. It is a fundamental nature of being. Sure, there are all kinds of practices embedded within religion, all kinds of stipulations and whatnot. In the end, I view these as ways to move you towards realizing the nature of grace and interdependent arising for yourself. Any authoritarian mandate is simply an immortality project.

So is there value in life when it all leads to death? What actually provides value in life? I still don’t have a definitive answer to that for every single aspect of life, but the contemplation of ideas walks me closer and closer to wisdom, to waking up, to living in grace, to accepting the ever-changing form of energy and reveling in the wonder and freedom of that thought.